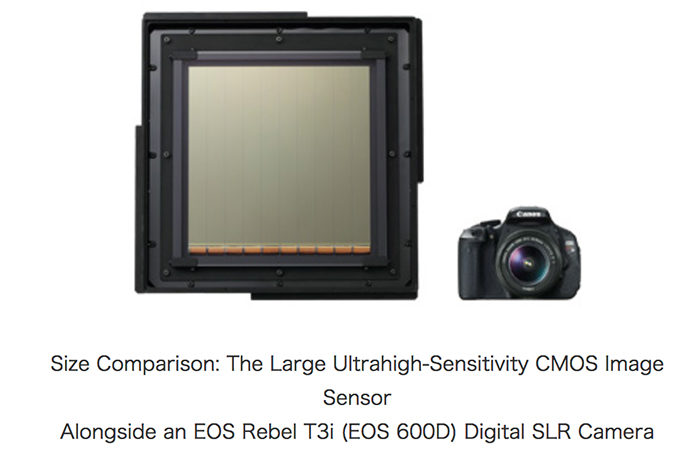 Canon is exploring the Large Sensor Image Future. And today they launched this press text talking about a 20cm square CMOS sensor that is 40 times the size of a “Normal” FF sensor. All these kind of sensor are meant for particular industrial applications. I doubt such large sensor will be used by the classic medium or large format camera manufacturers.

A certain level of light is required when shooting with a digital camera or camcorder, and without it, images cannot be captured due to insufficient sensitivity.

In the pursuit of further improving the sensitivity of imaging elements, Canon has embraced the challenge of achieving higher levels of sensitivity and larger element sizes while maintaining high-speed readout performance, and has succeeded in developing the world’s largest class of CMOS image sensor measuring approximately 20 cm square. At present, the standard diameter of the silicon wafers on which CMOS sensors are fabricated is 12 inches (approx. 30 cm). As such, a 20-cm-square sensor is the largest size that can be manufactured based on these dimensions, and is equivalent to nearly 40 times the size of a 35 mm full-frame CMOS sensor.

Increasing the size of CMOS sensors entails overcoming such problems as distortion and transmission delays for the electrical signals converted from light. To resolve these issues, Canon not only made use of a parallel processing circuit, but also exercised ingenuity with the transfer method itself. As a result, the sensor makes possible the shooting of video at 60 frames per second with only 0.3 lux of illumination (approximately the same level of brightness as that generated by a full moon).

Possible applications for this ultrahigh-sensitivity CMOS sensor include the video recording of celestial objects in the night sky, nocturnal animal behavior and auroras, and use in nightwatch cameras.

When installed in the 105 cm Schmidt camera at the Kiso Observatory operated by the University of Tokyo’s Institute of Astronomy, the ultrahigh-sensitivity sensor made possible the world’s first video recording of meteors with an equivalent apparent magnitude of 10, a level so dark that image capture had not been possible until now. As a result, the sensor provided proof that the frequency with which faint meteors occurred coincided with theoretical estimates to date. By supporting more detailed recording and statistical analysis of meteors, the technology could lead to an increased understanding of the influence that meteors may have exerted on the development of life on Earth.

Canon has spent many years working to reduce the pixel size for CMOS image sensors. These efforts have led to astounding results, making possible a pixel size of 2.2 µm for a total of approximately 120 million pixels on a single sensor. The APS-H size (approx. 29 x 20 mm) CMOS sensor boasts approximately 7.5 times the number of pixels and 2.6 times the resolution of sensors of the same size featured in existing products.

This CMOS sensor performs parallel processing to support the high-speed readout of large volumes of pixels, and by modifying the method employed to control the readout circuit timing, Canon successfully achieved the high-speed readout of sensor signals. As a result, the sensor makes possible a maximum output speed of approximately 9.5 frames per second, supporting the continuous shooting of ultrahigh-resolution images.

Images captured with the ultrahigh-resolution CMOS sensor maintain high levels of definition and clarity even when cropped or digitally magnified. Accordingly, this sensor offers potential for a range of industrial applications, including cameras for shooting images for large-format poster prints, cameras for the image inspection of precision parts, aerospace cameras, and omnidirectional vision cameras.

The 120-megapixel ultrahigh-resolution performance of the Canon CMOS sensor may lead to unprecedented industrial applications that could only be imagined in the past.