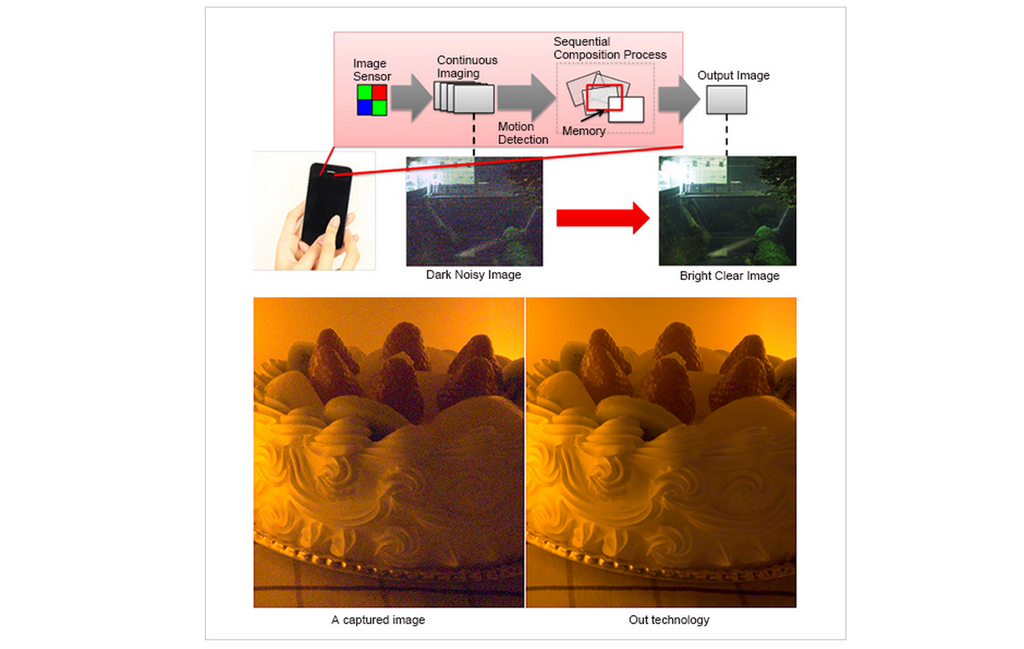 Toshiba officially presented a new sensor that has a sort of built-in Olympus alike High Resolution mode. Here is the full press text:

Development History
With the miniaturization of semiconductors, the number of pixels in image sensors has been increasing year by year. It is now possible to take an image with higher resolution than ever before. However, the size of image sensors has not changed and this leads to increase of noise in the image because the amount of light received per pixel decreases as the pixel count increases. The long time exposure reduces image noise, but the image quality suffers due to camera shake. Conventionally, electronic image stabilization technology has been used to prevent image quality deterioration. In electronic image stabilization, several copies of the image are overlaid to compensate for the noise and a large amount of parallel memory is required to hold the multiple image copies. As a consequence, the noise reduction effect is limited by the number of image copies that can be kept in memory.

Features and Benefits of Our Technology
Toshiba has developed the super high quality image processing technology, allowing the user to acquire a much higher quality image by significantly reducing noise and preventing camera shake without requiring a large amount of memory. This technology generates a very sharp image with less noise by overlaying many continuously recorded images. By correcting camera shake with our proprietary high-precision motion detection technology, the image is sequentially generated using the memory capacity required for just a single image. This new technology effectively and precisely detects everything from tiny vibrations to large camera shake. Random noise is canceled out by overlaying multiple images, and object edges are kept clear and crisp through the same process. The increase in the number of captured images makes it possible to obtain very high image quality using very little memory for storage, which to date has required a highly sensitive large image sensor. In particular, night scenes suffered from increased image noise. Our technology will enable users to produce extremely clear images at low light conditions.