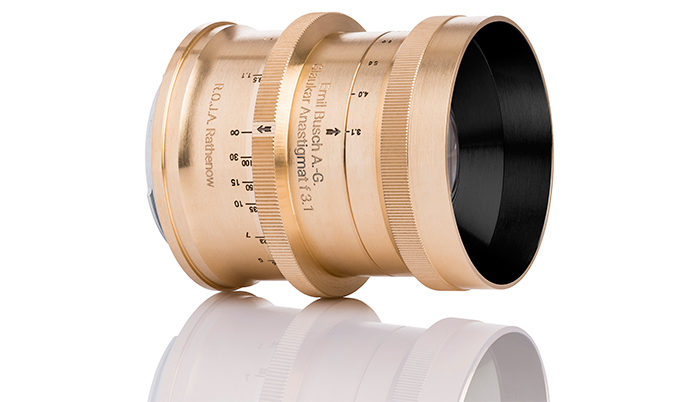 The Emil Busch Glaukar 3.1 Lens will be available MFT, Sony E, Fuji X and Leica mounts. You can buy the lens for $749 on Kickstarter. Here is the press text:

More than 100 years after the Emil Busch Glaukar 3.1 was introduced as one of the most important lenses of its time, two top German photographers have reinvented this classic as a modern portrait lens that promises to be as innovative as the original. The pair has partnered with well-known optical engineer Wolfdieter Prenzel on this project in which production will mostly take place in Wetzlar, Germany, to ensure the highest quality.

The new Glaukar 3.1 will have the same brass appearance and silhouette as the original but will be constructed from high-end aluminum with a brass-like oxidation, which ensures the durability and mechanical precision of a modern lens. But while the new lens will look very much like the classic, the inside has been redesigned by Prenzel, completely from scratch to meet today’s high-tech demands.

But due to its specially coated lenses the new Glaukar produces a fascinating mixture of sharpness, strong colors and, along with 12 aperture blades, wonderful bokeh effects.

Ernst and Bagdu, whose clients have included Rolls Royce, Redken, Chopard, to name a few, knew what qualities they wanted in a lens. They defined the principles and joined with lens designers and manufacturers in Germany to design the first prototype.

In fact, it was the success of one of their clients, German lens maker Meyer Optik, that inspired them to start their own project. Meyer Optik has even put the pair together with key German camera contacts in Wetzlar to help support the founders.

So, while the pair are a startup, they are backed by years of industry experience.

“We have seen some campaigns in the past where old lenses were brought back for the users of today’s cameras and appreciated them, but we wanted to go further and recreate a lens that would otherwise be lost,” Bagdu said.

“But at the same time, the quality of the lens must be to the highest standards as well,” Ernst added. “Therefore, we are glad that we could ensure cooperation with some leading German firms.”

Manufacturing will be done to a large extent by Uwe Weller Feinwerktechnik in Wetzlar, which was formed from the merger of several firms, including the mechanical divisions of Leica Camera and Zeiss-Hensoldt. The partnership with Uwe Weller GmbH will ensure that the high-precision elements of the lens will be produced precisely to Prenzel’s design, which will include the use of top-of-the-line Schott and O’Hara glass.

The exclusive use of Schott and O’Hara glass ensures that the goal of creating the perfect portrait lens is put into practice exactly as intended.

Part of their inspiration came from the legendary Glaukar 3.1 that pioneer German lens maker Emil Busch introduced in 1910. The original Glaukar was a groundbreaking lens because it corrected for spherical aberration, coma and astigmatism – something that no other lens in daily use could do at the time. Not even Zeiss and its famed lens maker Paul Rudolph had been able to match the Glaukar since their designs required coatings not available at the time.

To see the media kit, including sample images, go to http://bit.ly/2u1Rh5b