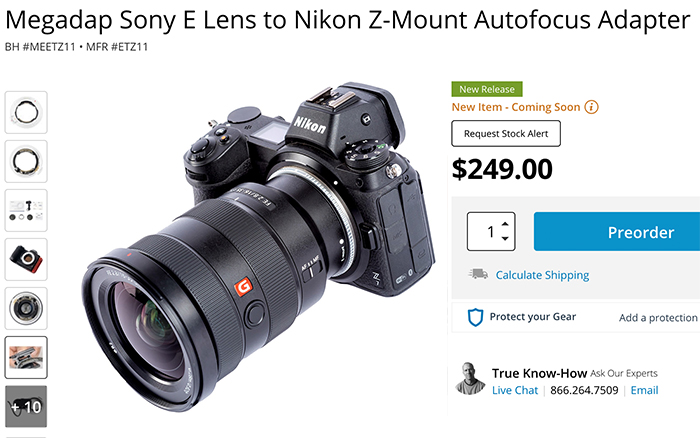 You can preorder it now at BHphoto (Click here).

Here is the Press text:

Megadap has spent countless of hours to optimize the firmware and ensured a much faster focusing speed for most of the compatible lenses when over similar adapters in the market. It is also first of its kind to be compatible with manual lenses without electronic chips. Camera IBIS is supported in AF- S/AF-C/MF modes. Auto aperture control and Aperture coupling (Aligned

An USB update tool is included in the packing of ETZ11. The update can easily be done by connecting the clip-on electronic contact spots on the adapter and plugging the USB end into a computer. Simply drag the updated firmware downloaded from Megadap official website (www.megadap.net) into the pop up folder (like working with a flash drive) and the update is done.

High Quality Plating is applied on the surface of Megadap ETZ11 Autofocus adapter. 2mm thickness made of aluminium alloy is thin but though. Ultra- protection of the circuit board has been designed to protect the circuit board from daily uses. New design of the release button has enable users to press the button down with ease for quick installation. The adapter itself is light and thin, making the use of other brands’ lenses feel original.