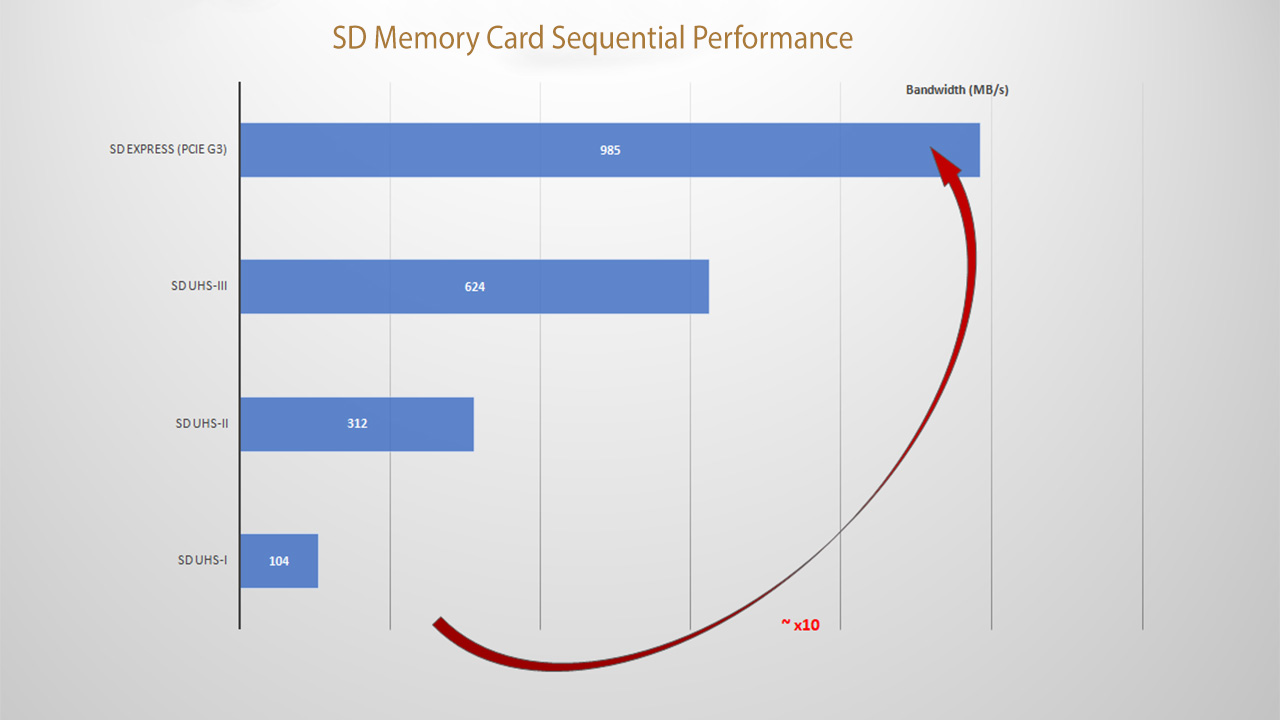 -We were told that the development of the SD Express was actually not driven (for the most part) by the photo industry. It was pushed forward by other industries that are part of the SD Association (including mobile-computing, games, IoT, automotive and others) who were interested in the more modern and well-established PCIe interface and NVMe protocols. These changes make the upcoming SD Express cards very SSD-like in nature.

-It is important to note that despite the lack of push from the photo industry for the new SD Express, the upcoming new cards will be backwards compatible with SD UHS-I devices so you will be able to use them in any camera or device that work with existing cards. This will be done in a way similar to what has been done in the past with UHS-II (and UHS-III) where one row of connectors on the back of the card is dedicated to UHS-I and the other to the SD Express PCI-E. This also means that in backwards compatibility mode, the card will only support UHS-I speeds and not UHS-II/III.

– For the first time in memory card history we are now in a place where both major players base their upcoming cards on the same interface and protocol – the new CF Express which will replace XQD (and has the same form factor as XQD) is also based on the same basic PCIe and NVMe.

– In the past, SD was typically considered to be a consumer/prosumer oriented format while CF (and later XQD) were more of a pro level memory formats. At the moment it isn’t clear if this division will continue between SD Express and CF Express, however, we believe that the fact that both are now based on the same basic PCIe/NVMe protocols might have interesting consequences in the future.

– As we have noted above, SD Express was not developed primarily for the camera industry but was pushed forward by other markets. This means that camera manufacturers may not be the first to implement it. However, jumping on the SD Express train for all type of products should be easier than it was for previous SD iterations since the PCIe interface and NVMe protocols are well established in the industry with all the supporting software and hardware required for implementing them.

– As for when the first SD Express supported cameras will be available on the market, Mr. Pinto did not wish to speculate, but based on our understanding this will not happen during 2019 (and possibly not even during the first half of 2020).